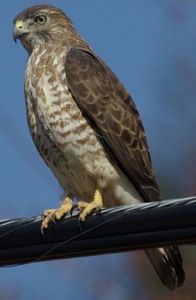 First I want to give credit to JulieFromVT for this wonderful photograph of a beautiful raptor which I believe I saw this morning.

I do some of my best bird watching while walking my two female Cockers, Sadie and CoCo. Our presence on the street around sunrise always stirs up the animal neighbors.

Halfway into our walk I became aware of a very loud and hawkish ke-eee in the trees above us. I looked hard for several minutes trying to locate the source.

Annoyed, the girls gave me their best sled dog imitation in hopes of dragging me into moving, but I really wanted to find the hawk that was making all the noise.

I gave in and continued walking, but I didn’t give up. As we moved away from where I last heard the sound, it got quiet, so I let out my version of what I had heard from the hawk.

Apparently, my hawk whistling wasn’t too shabby. Right back in my direction came two more ke-ees. Then I spotted it.

Up on the very top, in the highest branch, of the tallest tree sat a striped, red-brown hawk. I thought it was a red tailed hawk, but later, after seeing Julie’s photo, I now believe it was a Broad Winged Hawk. The brown and white stripes I thought I saw on its chest, may not have been stripes at all.

There have always been mated pairs of hawks living in this neighborhood, but today I may have finally figured out who they are and even spoken to one of them. Great way to start the day.